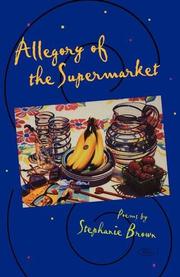 ALLEGORY OF THE SUPERMARKET

Despite some obvious clinkers, this first collection is often very entertaining, which is no easy feat these days: sly and sexy, dry and ironic, jaded and funny, Brown catches you off guard with her playground rhymes and street-song repetitions. And her titles are often a hoot in themselves: “I Was a Phony Baloney!,” “No, No Nostalgia!,” “Mommy Is a Scary Narcissist,” and so on. But the humor isn—t all one-note jokes and giggly post-feminist wise-cracks. Many of her character studies verge on diatribe, yet still bear the empathy of one who’s been there, done that: in “Feminine Intuition,” she mocks and mourns female fad- followers, bitter singles, and brittle old ladies; and “Five Sketches” are spare, cutting portraits of a professional woman, an earth mother, and a Miss America type, with references to legendary difficult women like Mary McCarthy and Clare Luce. Other knowing poems goof on a woman obsessed with working out (—a gargoyle for the Age of the Physically Fit—); criticize the lipo- sucked; and scorn the sentimentalists (—Warm, Fuzzy—). Brown’s wit and anger also target men: the seducers and flatterers, the self-satisfied suburbanites and the beer-gutted bores. Prose poems, a few of which first appeared in the high-brow porno mag Yellow Silk, chart the poet’s desires through puberty, graduate school, and a near-lesbian encounter, with her eventually abandoning lust for simple ’sacrifice order and love.” It feels a bit padded, but this welcome debut announces a voice both smart and original.