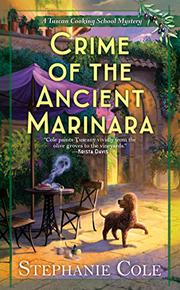 CRIME OF THE ANCIENT MARINARA

A Tuscan cooking school spikes its marinara with murder.

New cooking school owner Nell Valenti isn’t very nervous when food tour operator Manny Manfredi drives his Cucinavan up to the Villa Orlandini, outside picturesque Cortona, Italy, and deposits the first group of tourists to sample Chef Orlandini’s unique blend of culinary instruction and chaos. After all, how difficult can it be to shepherd five budding Barefoot Contessas—a Baltimore barista, an outdoor educator from New Jersey, a middle-aged Florida couple, and a waiter from Brooklyn—through five days of Marinara Misteriosa, a course on red sauce? And if Chef chooses to rearrange Nell's agenda each day, upending the planned meals and sending the students into the woods to forage for wild mushrooms, what does it really matter? If Chef’s olive-grower nephew, Pete, who’d been warming nicely to Nell before the students’ arrival, suddenly becomes irritable when the Brooklyn waiter turns out to be a little too suave for his taste, is that any reason to panic? These troubles are all antipasti. Nell needs to save her panic for the main course, when one of her charges ends up dead. Now she has to act, and her investigation, unlike those of so many female sleuths, is as sharp as Chef’s knives. No bumbling around confronting witnesses, antagonizing the local carabinieri, or daring the killer to try to stop her—just some daring leaps of logic based on first-timer Cole’s carefully planted clues.

Worth a second visit.