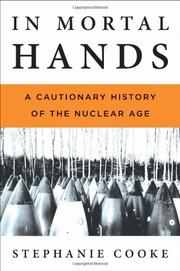 A Cautionary History of the Nuclear Age

Diligent history of nuclear proliferation and peaceful nuclear energy makes a good case that they are intimately connected and equally out of control.

In her first book, veteran nuclear-industry journalist Cooke quickly dispenses with the Manhattan Project before settling down to portray post–World War II America, suddenly the world superpower because it had sole possession of the atomic bomb. While other historians stress the Soviet Union’s scramble to develop its own nuclear weapons, Cooke gives equal time to Britain and France. Offended at America’s refusal to reveal the secrets of a technology both helped develop, each launched its own successful Manhattan Project, as immensely expensive, oppressively secretive and environmentally damaging as the original. By 1960 the Soviet Union, the United Kingdom and France all had the bomb; they were followed in subsequent decades by China, India, Israel and Pakistan. In parallel, Cooke describes the growth of nuclear power. It was enthusiastically embraced by the U.S. government as a means of soothing Americans’ fear of atomic fission. Also, American authorities hoped to discourage other governments from developing atomic weapons through the generous Atoms for Peace policy, which supplied enriched uranium to nations eager to acquire nuclear technology in exchange for a promise not to use it to make bombs. Neither goal was achieved. No fan of nuclear power plants, Cooke emphasizes the expense of their construction and maintenance, the complexity of their apparatus, the pollution they cause and the catastrophic accidents that have occurred. Possession of nuclear weapons has become the mark of a great nation, she notes, just as battleships were a century ago, and any government willing to make the effort can build an atomic bomb. Since America shares this macho ideal, nonproliferation efforts always fail because have-not nations correctly perceive that the United States will never give up its own arsenal.

Skillful, unsettling arguments that the world is headed toward nuclear disaster from two different directions.