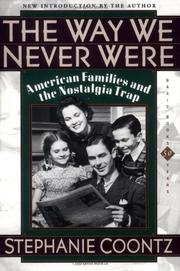 THE WAY WE NEVER WERE: American Families and the Nostalgia Trap

Placing the American family in its historical, cultural, economic, and philosophic context, Coontz (co-ed., Women's Work, Men's Property, 1986) identifies the myths--and their sources, functions, and fallacies--that Americans generate around family life, as well as the terrible burden these illusions create. Violence, abuse, poverty, ignorance, alcoholism, dependence on government support--in brief, all the social ills attributed to the breakdown of the family--have in fact been a part of American social life since Colonial times, Coontz says. She further argues that our ideal of family life is primarily an invention of the 50's, projected in TV sitcoms such as Leave It to Beaver, and is an ideal as pernicious as are the social problems it supposedly prevents. Families always have been diverse and fragile, shaped by a community of interdependencies and reciprocities easily lost. Even the division of labor between the nurturing, altruistic female and the aggressive, competitive male--to whom she is supposedly connected by a bond of love--is an illusion and a source of great unhappiness. Indeed, many of the problems in family life, Coontz says, are caused by the unfounded belief that the family should be a symbol of strength, a model of serf-sufficiency, a center of values in which people find refuge and raise children who will be good citizens. Today, the survival of the family depends on realistically assessing its diversity and what it can and can't do; on its overcoming the fantasies of what it is supposed to be and how it is supposed to function; and on its recovering its civic commitments. Clear, incisive, and distinguished by Coontz's personal conviction and by its vast range of cogent examples, including capsule histories of women in the labor force and of black families. Fascinating, persuasive, politically relevant.