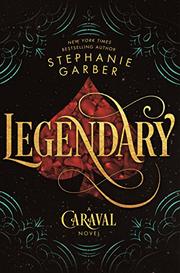 From the Caraval series, volume 2

Garber returns to the world of bestseller Caraval (2017), this time with the focus on younger, more daring sister Donatella.

Valenda, capital of the empire, is host to the second of Legend’s magical games in a single year, and while Scarlett doesn’t want to play again, blonde Tella is eager for a chance to prove herself. She is haunted by the memory of her death in the last game and by the cursed Deck of Destiny she used as a child which foretold her loveless future. Garber has changed many of the rules of her expanding world, which now appears to be infused with magic and evil Fates. Despite a weak plot and ultraviolet prose (“He tasted like exquisite nightmares and stolen dreams, like the wings of fallen angels, and bottles of fresh moonlight.”), this is a tour de force of imagination. Themes of love, betrayal, and the price of magic (and desire) swirl like Caraval’s enchantments, and Dante’s sensuous kisses will thrill readers as much as they do Tella. The convoluted machinations of the Prince of Hearts (one of the Fates), Legend, and even the empress serve as the impetus for Tella’s story and set up future volumes which promise to go bigger. With descriptions focusing primarily on clothing, characters’ ethnicities are often indeterminate.

Dark, seductive, but over-the-top: Characters and book alike will enthrall those who choose to play.