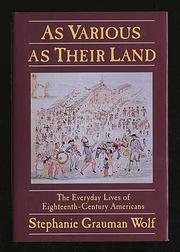 AS VARIOUS AS THEIR LAND

The Everyday Lives of Eighteenth-Century Americans

Less vivid and detailed than the five earlier volumes in the ``Everyday Life in America'' series (Harvey Green's The Uncertainty of Everyday Life 1915-1945, etc.), this last installment emphasizes diversity of American experience during the transitional 18th century. During the 1700's, America grew from ten colonies on the Eastern seaboard, consisting of a quarter-million people preoccupied with survival and their European origins, to 16 states expanding westward, consisting of five million citizens developing a national identity. Here, Wolf (Research Fellow/University of Pennsylvania) is concerned with the commonplace experiences that made up that identity: the organization of daily life and of private time; the habits, attitudes, and occupations of ordinary people—their entertainments and responsibilities, what they ate and wore, and how they furnished their homes. Grouping people by families, occupations, and communities, Wolf also distinguishes them according to class and geography: New England Puritans, Middle Atlantic farmers, Southern plantation owners, Native Americans, African-Americans, pioneers, craftsmen, merchants, and professionals. In a chapter called ``The Invention of Childhood,'' the author's awareness of the diversity of experience is especially revealing, emphasizing the different conceptions of children—from the ``pets'' of the Virginia aristocracy to the laboring children of German immigrants. Wolf concludes by studying community as neighborhood and as network, the development of communications, and the role of the Church in regulating communal life. Using diaries, magazines, and letters, Wolf does some historical housekeeping here, setting things in order, polishing, arranging, and simplifying. A useful resource.