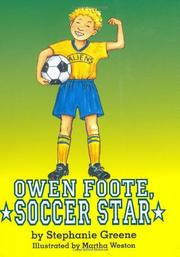 A second grader sees adults making mistakes, and helps one grown-up get it right in this predictable empowerment story, a sequel to Owen Foote, Second Grade Strongman (1996). After persuading overweight friend Joseph to join him for soccer tryouts, Owen has second thoughts: Not only are both of them bad-mouthed by a bully, but the coach, Dave, divides the “Aliens” into two teams according to ability. The members of the B team, including Joseph, rightly wonder if they’ll ever get into a real game. Owen considers quitting; instead, he calls Dave to explain how demoralizing the split is, and also picks up a bully-handling tip from a friendly seventh grader. Though she creates natural-sounding dialogue, and uses language and humor appropriate to her target audience, Greene focuses on Owen’s systematic problem-solving at the expense of plot, character development, even soccer action. By the end, Dave has apologetically reunited the Aliens, the bully is properly chastened, and Joseph turns out to be a natural goalie. With realistic black-and-white drawings to capture some of the action, this is a lightweight, neatly wrapped package of uplift. (Fiction. 7-9)