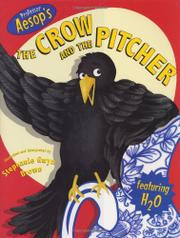 PROFESSOR AESOP’S THE CROW AND THE PITCHER

Busy design seeks to illustrate Aesop’s fable of the crow and the pitcher, with an emphasis on the scientific method—hence, presumably, the “Professor” Aesop of the title. The story is told straightforwardly and without linguistic elaboration: the thirsty crow finds a pitcher of water; the water level being too low for his beak to reach, he uses the principle of water displacement to raise the level of the water with a series of pebbles until he is able to drink. With a heavy reliance on digital technique, newcomer Brown’s full-bleed, mixed-media illustrations add what are probably meant to be clever touches: a thermometer measuring the “ambient temperature” (a term that goes unexplained), a Thirst-o-meter, a determination scale, and a pebble indicator are added one by one as the crow works through his solution. Blueprint diagrams illustrate both the essential problem and the solution, and an X-ray shows the raising of the water level in process. The moral—“Necessity + Perseverance (that’s good old hard work) = Invention”—precedes a busy and confusing double-paged spread explanation of “the scientific method according to crow.” The notion of introducing children to the scientific method is praiseworthy, but this attempt to illustrate it falls victim to its own cuteness. While the various scales at the sides of the page are entertaining, they add little to the mission of the narrative, instead serving to distract the reader from the simple elegance of the crow’s solution. The illustrations are bright and appealing, but in the end they are more obfuscatory than illustrative. Children are natural scientists; they do not need these extraneous bells and whistles to encourage exploration. (Picture book/nonfiction. 4-7)