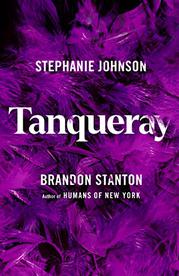 A former New York City dancer reflects on her zesty heyday in the 1970s.

Discovered on a Manhattan street in 2020 and introduced on Stanton’s Humans of New York Instagram page, Johnson, then 76, shares her dynamic history as a “fiercely independent” Black burlesque dancer who used the stage name Tanqueray and became a celebrated fixture in midtown adult theaters. “I was the only black girl making white girl money,” she boasts, telling a vibrant story about sex and struggle in a bygone era. Frank and unapologetic, Johnson vividly captures aspects of her former life as a stage seductress shimmying to blues tracks during 18-minute sets or sewing lingerie for plus-sized dancers. Though her work was far from the Broadway shows she dreamed about, it eventually became all about the nightly hustle to simply survive. Her anecdotes are humorous, heartfelt, and supremely captivating, recounted with the passion of a true survivor and the acerbic wit of a weathered, street-wise New Yorker. She shares stories of growing up in an abusive household in Albany in the 1940s, a teenage pregnancy, and prison time for robbery as nonchalantly as she recalls selling rhinestone G-strings to prostitutes to make them sparkle in the headlights of passing cars. Complemented by an array of revealing personal photographs, the narrative alternates between heartfelt nostalgia about the seedier side of Manhattan’s go-go scene and funny quips about her unconventional stage performances. Encounters with a variety of hardworking dancers, drag queens, and pimps, plus an account of the complexities of a first love with a drug-addled hustler, fill out the memoir with personality and candor. With a narrative assist from Stanton, the result is a consistently titillating and often moving story of human struggle as well as an insider glimpse into the days when Times Square was considered the Big Apple’s gloriously unpolished underbelly. The book also includes Yee’s lush watercolor illustrations.

A blissfully vicarious, heartfelt glimpse into the life of a Manhattan burlesque dancer.