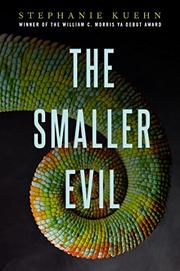 For as long as he can remember, Arman has taken medications for numerous chronic physical and emotional ailments. So when Beau, a reassuring but mysterious man, invites Arman to a healing retreat in the hills of Big Sur, he accepts. He’s nervous but eager for a chance to move beyond his sense of brokenness. At the retreat compound, Arman is among strangers, except for his classmate Kira, a black girl who is the daughter of a famous civil rights attorney, and her boyfriend, Dale. Like Arman and most of the other characters, Dale is white. Arman is at once comforted and confused by Beau’s interest in him and by his encounters with a beautiful girl, a cook at the compound. But talk of “inoculation” and “quarantine” and the program’s other odd rituals unnerve Arman, as effectively conveyed in Kuehn’s third-person narration. When Beau disappears, Arman is the only witness to what may have been a murder or a suicide—he’s not sure which, because he can’t remember exactly what happened. Arman’s tale of self-discovery is woven into the bigger mystery of Beau’s fate, but the result of the latter is less than enthralling. More gripping is the insightful and empathetic look into the mind of a teen struggling to heal.