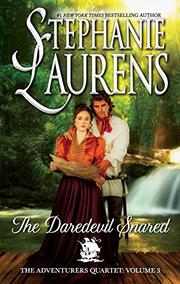 A romantic rumble in the jungle.

Capt. Caleb Frobisher is a man on a mission—a mission his older brothers started in the first two books of Laurens' Adventurers Quartet. He’s been sent to follow a rumor that British citizens are being enslaved in a covert diamond mine in West Africa, which leads him to the mine where Katherine Fortescue is being held. Katherine, one of the de facto leaders of the captured group, is delighted to learn that a rescue attempt is underway. But when Dubois, the sociopath mine leader, discovers Caleb and his crew in hiding, they are also forced to work, and now all wait anxiously to see if rescue will arrive from England. After an instant attraction between Caleb and Katherine, their romance develops slowly, but once they finally kiss, their love becomes as unbreakable as the diamonds they mine. The plot drags under long descriptions of the complicated schemes of the prisoners but gains steam toward the end. Though the unusual setting is beautifully described in places, the realities of colonialism barely make an appearance, and readers who look for period details in their historical romance may want more. The book ends abruptly, and readers will need to wait for the final book in the series to see if the couple reaches their happy ending, as well as to uncover the mysterious backers of the illegal venture.

An adventure-filled entry in a solid historical romance series that is best enjoyed in order.