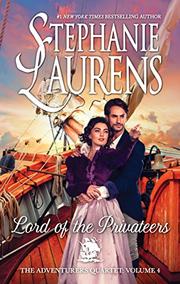 LORD OF THE PRIVATEERS

The oldest brother of a grand British family finishes what his brothers started.

The first Frobisher brother discovered an illegal diamond mine, the second tried to learn more, the third got swept up by it—and now it is up to Royd Frobisher, the eldest of the clan, to lead the mission that will free its captives and bring the perpetrators to justice. Just as he receives his orders and prepares his ships for Freetown, a woman he’s tried desperately to forget sweeps back into his life, asking to go with him. Isobel Carmichael and Royd were childhood friends who were handfasted eight years ago, then torn apart when a secret mission kept him away through most of their year promised to each other. Isobel has her own reasons for tagging along, as does their son, Duncan—a surprise stowaway and totally unknown to Royd. Their revived chemistry is instant and fierce and held back only by their broken hearts and life-threatening mission. In the final volume of The Adventurers Quartet, many plotlines require wrapping up, and this detracts at times from Isobel and Royd’s second chance at love. Between a complicated rescue scheme and social intrigues, much of the book is devoted to adventure and justice rather than romance. When the plot turns to love, their relationship is steamy and sophisticated, and it’s delightful to see all four couples reach their final happy endings together as the quartet ends. Readers looking for more focus on romance may be disappointed, and those who haven’t read the first three will be confused—but faithful readers will love this story and its four plotlines as they come to an appropriately grand ending.

A sweeping end to an exploratory historical romance quartet.