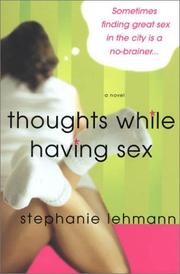 THOUGHTS WHILE HAVING SEX

Jennifer Ward is delighted when a young director tells her he loves her play: Peter Heller cites all the reasons why it’d be crazy to put on the work of a nobody like her, but then he promises her the moon. Okay, he promises her an Equity-waiver production in an Off-Off-Off Broadway theater in a Chelsea office building. How can she say no to such a cute guy? Maybe he’ll sweep her off her feet and make passionate love to her—an experience Jennifer has been searching for ever since her sister Diana, a manic-depressive actress, committed suicide four years ago. No matter how many Cosmo articles she reads to improve her sex life, she still feels nothing, and masturbating isn’t working out. Well, she can always throw herself into her work, now that casting is beginning for Til Death Do Us Part, a dramatic, blow-by-blow account of her bickering relationship with her dead sister. Looks like Kelly Cavanna, a gorgeous unknown, will bring just the right touch of crazy selfishness to the part. As seductive offstage as on, Kelly hits on Jennifer, confessing that the memory of her rape at ten by a fourteen-year-old boy who let his sister watch still turns her on. Jennifer has no such tender memories to share and isn’t excited by Kelly’s advances—or exactly surprised when Kelly seduces Peter a few weeks later. What the heck. Jennifer’s been to bed with Peter and still didn’t feel anything much. But her play is a surprise hit in a small way, and the public catharsis of playing herself on stage when the other actress gets a better part seems to help her troubled soul. Other successes follow. Kelly makes the move to Hollywood, then back to Broadway. Time marches on, right?