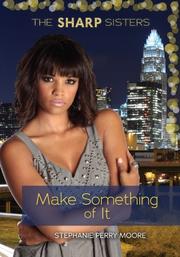 MAKE SOMETHING OF IT

From the Sharp Sisters series, volume 1

In this series opener, Shelby Sharp, the oldest daughter of a Charlotte, North Carolina, mayoral candidate, pursues her fashion-design dream and takes an earnest but simplistic stand against domestic violence.

There are five Sharp sisters, three biological and two adopted, but the others make only sporadic appearances here. The inconsistent attention paid to Shelby’s four younger sisters is typical of the oddly disjointed narrative: The girls are horrified to learn their father will be sending them to public school as a political move, but they acclimate with relatively little trouble. What at first appears to be a story about Shelby’s attempts to stay away from a rival candidate’s dreamy stepson for the good of her father’s campaign abruptly becomes a story about Shelby’s desire to become a fashion designer despite her mother’s wish that she go into law. The narrative voice is similarly clumsy, often providing unnecessary and repetitive explanations (“ ‘It’s not a scarf, Mom. It’s a scart—a scarf-belt,’ I said brazenly, wanting her to use the right name for my design”). Domestic violence is a theme throughout, but it is portrayed with almost cartoonish obviousness. The second and third volumes, Better Than Picture Perfect and Turn Up for Real, publish simultaneously.

Too many plotlines, too little nuance.