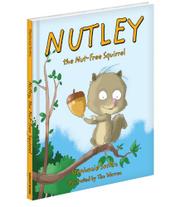 A squirrel handles his nut allergy with aplomb—and a little help from his friends—in Sorkin’s debut picture book.

One day, Nutley the squirrel is simply eating “what a squirrel eats” when he has a strange reaction. He itches, puffs up and breaks out in hives, and soon, his fears are confirmed: He has an allergy. (In the illustration, he eats from a big bag of peanuts, which may make some young readers point out that real squirrels eat acorns; however, peanuts are a more familiar allergen in the human world.) In a series of friendly, if singsong, rhymes, Nutley turns out to be a smart little squirrel: He takes charge of his newly discovered allergy in a way that would make any pediatric allergist proud—by making a plan. He talks to his friends, asks for help and focuses on the favorite foods that he can still safely eat, such as gummy bears. At first, he worries that he’ll seem strange to others (“A squirrel allergic to nuts—how odd! / I thought I’d feel alone.”), but his friend the dog immediately speaks up (“I’m a dog allergic to bones!”). It also turns out that the pelican is allergic to fish; the bee, to pollen; and the fly, to stone fruit. Although the verse skips along at a merry pace, some rhymes occasionally fall flat (“Surprising as it is to all, / since I do live in a tree, / I must avoid peanuts and tree nuts / to keep myself healthy”). However, Sorkin’s tale manages to be instructive without being didactic and will likely prove to be a fun read for even allergy-free children. The illustrations engagingly portray Nutley and his crew of supportive friends as looking just as friendly and likable as they appear in the text.

A warm, funny book that will hearten kids with allergies.