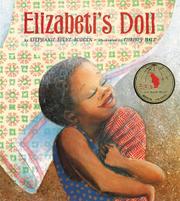 Charmed by her new baby brother, Elizabeti decides that she wants a baby of her own; she picks up a smooth rock, names it Eva and washes, feeds, and changes her, and carries her about in her cloth kanga. Hale dresses Elizabeti and her family in modern, brightly patterned clothing that practically glows against the earth-toned, sketchily defined Tanzanian village in which this is set. Although Eva appears a bit too large for Elizabeti to handle as easily as she does, the illustrations reflect the story’s simplicity; accompanied by an attentive hen, Elizabeti follows her indulgent mother about, mimicking each nurturing activity. The object of Elizabeti’s affection may be peculiar, but the love itself is real. Later, she rescues Eva from the fire pit, tenderly cleans her, then cradles the stone until she—Elizabeti—falls asleep. Stuve-Bodeen’s debut is quirky but believable, lightly dusted with cultural detail, and features universal emotions in an unusual setting. (Picture book. 6-8)