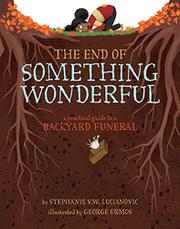 THE END OF SOMETHING WONDERFUL

A Practical Guide to a Backyard Funeral

Several school-age children try to accept the deaths of their pets by holding backyard funeral ceremonies.

This misguided attempt at bibliotherapy endeavors to help children in their understanding and acceptance of the death of a pet with an approach using dark humor and attempts at clever throwaway lines and situations. The cover illustration shows a dead turtle falling out of its burial box, and on the endpapers are skeletons of various pets, including dogs. Five diverse children are shown with their dead pets, including two fish, a turtle, a guinea pig, and a bug; these dead pets are collectively referred to as Something Dead. Funeral suggestions include various methods of burial or disposal along with ideas for telling stories about the dead pet, singing songs, and adding flowers to the grave. Two problematic warnings include a note to be sure the pet is actually dead before burying it and advice against digging up a deceased pet to check on it, while an overly cheerful conclusion shows one of the children eyeing a lobster at a fish market as a possible replacement for her dead turtle. While the basic concepts of honoring a deceased pet with a memorial service are here, the overall flippant tone of the second-person text is not helpful to either prepare a child for an impending death or deal with the emotions following a loss. The death of a dog or cat, often a traumatic experience for the entire family, is avoided except for the skeletons on the endpapers.

Not recommended, especially for anyone who’s ever lost a beloved pet.