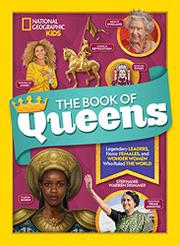 THE BOOK OF QUEENS

A united nations of leading ladies of the past and present, commingled with luminaries in the arts, sciences, and annals of piracy.

Leading off with full-page portraits of Aretha Franklin and Joan of Arc to herald her glittering gallery’s expansive purview, Drimmer dishes up short introductions to over 100 strong women who either headed states or shone in academic or public spheres. Gathered thematically, each comes with a picture—some true to period but many done in newer styles, including lots of stock images looking like models in costume—and a biographical note. Along with well-documented royals from Hatshepsut to the Elizabeths I and II, Catherine the Great to Anne Boleyn (“her reign was cut short”), readers will get ganders at such non-Western achievers as Himiko, Japan’s earliest known ruler, and Ashanti rebel Yaa Asantewaa. Venturing into realms beyond the geopolitical, Trimmer profiles Simone Biles and other “Sovereigns of Sports,” “Monarchs of Music,” “Legendary Leaders” like Wonder Woman (the film version), and assorted aeronauts, astronauts, and “Nobel Nobles.” A number of male monarchs, mostly from the co-published Book of Kings, sneak into side boxes, and occasional featurettes focus on queenly armor, bling, and emblems. Considering the pervasive evidence of bloody-mindedness, readers in search of “lean in” role models may justly scoff at the closing tally of positive queenly character traits.