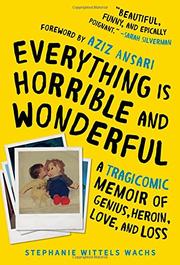 EVERYTHING IS HORRIBLE AND WONDERFUL

A penetrating story about the author’s experience witnessing addiction claim her brother’s life.

Writer, theater artist, and educator Wachs and her younger brother, Harris Wittels (1984-2015), a comedian best known for his work on Parks and Recreation, were practically inseparable as children, and they grew up to become best friends as adults. So when Harris confessed to being a drug addict three days before the author’s wedding, Wachs was understandably devastated. Over the next few years, as Harris battled his addiction and bounced in and out of rehab, the author gave birth to a baby with a permanent hearing disability and was suddenly faced with the emotional stress of worrying about her child’s future while simultaneously fearing for her brother’s life. Her worst nightmare became a reality when she got a phone call telling her that Harris died of an overdose, alone in his Los Angeles home, just days before he was set to move to New York for a new job. The narrative alternates between stories from before the tragedy—what growing up in the Wittels home was like, how Harris fell in love with comedy and turned it into a career, how Wachs started her own family, how everyone dealt with Harris’ addiction—and the author’s descriptions of life “after,” in which she speaks directly and candidly to her brother about the year that followed. In unflinching detail and with remarkable openness, Wachs describes the ugly and complicated nature of mourning someone who was not only a brother and best friend, but also an addict, a public figure, and a comedic genius whose life was cut off at the very cusp of success. Photos, texts, and correspondences, along with a touching foreword by comedian, actor, and close friend Aziz Ansari, enhance an already rich book.

A powerful debut that will resonate especially with readers who have loved and lost someone to addiction.

THE YEAR OF MAGICAL THINKING
by Joan Didion
Nonfiction