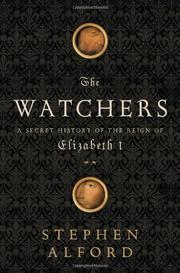 A Secret History of the Reign of Elizabeth I

Alford (History/Cambridge Univ.; Burghley: William Cecil at the Court of Elizabeth I, 2008, etc.) is an expert on all things Elizabethan, and his intimate knowledge of the queen’s ministers and the period’s political history guarantees the accuracy and thoroughness of this rip-roaring story.

The religious makeup of 16th-century England had bounced from Protestant to Catholic and back again with each succeeding offspring of Henry VIII. Her country’s future relied upon Elizabeth’s strength. The lack of a successor and England’s isolation and defenselessness produced obsessive vigilance on the part of Lord High Treasurer William Cecil (Baron Burghley) and Principal Secretary Francis Walsingham. As the author notes, the more obsessive the vigilance, the greater the danger perceived. That there was a real threat in the 1580s is without doubt. Philip II of Spain, Mary Queen of Scots, exiled Catholics and priests in France all worked unceasingly to usurp, overthrow or murder Elizabeth. Mary, first cousin to the queen, had the strongest claim to the succession. Her Catholic supporters in France plotted unceasingly during her two-decade imprisonment. The threat from Philip took some years to materialize, but England’s interference in the struggle of the Low Countries against Spanish rule pushed him to join the Pope’s Great Enterprise against Elizabeth. The third threat, posed by priests trained at the English seminary in France, was more insidious. Over the course of 40 years, Elizabeth’s hounds identified nearly 500 priests active in England; 116 of those met the gruesome fate of being hanged or drawn and quartered. Tracing the devious machinations of rebels and intelligence agents alike, Alford makes brilliant use of the intercepted letters, illegal publications and incendiary pamphlets found in the Elizabethan archives.

A great spy novel—except that it’s all true.