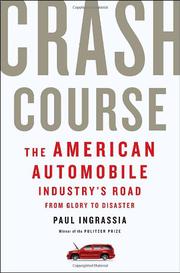 In the mid 1920s, Henry Ford, mass production's inventor, outsold all competitors combined. General Motors CEO Alfred Sloan pioneered mass marketing—“a car for every purse and purpose”—and hired the auto industry's first design staff. Walter Chrysler was Time Man of the Year in 1928. By 2009 both GM and Chrysler had entered bankruptcy and Ford only barely escaped. American car companies had sunk to a state best summarized by The Economist headline, “Detroitosaurus Wrecks.” Former Wall Street Journal Detroit bureau chief Ingrassia (co-author: Comeback: The Fall & Rise of the American Automobile Industry, 1994) conducts a brilliant industry autopsy, tracing the decline to the ’70s—though Ralph Nader exposed Detroit's shoddy products as early 1965—when the combination of complacent, arrogant management, increasingly mindless union militancy and surprisingly nimble foreign competition began to threaten America's worldwide leadership. Though the Big Three mounted a comeback of sorts during the ’80s and ’90s, the industry soon fell back into the bad habits that led to the current meltdown. A delightful mix of history and first-person reporting, Ingrassia's narrative covers numerous historic episodes, including the United Auto Workers' storied Battle of the Overpass, the introduction of the Corvette and the Thunderbird, the birth of Volkswagen and the rise of Toyota, the Ford Pinto that exploded and the Edsel that laid an egg, GM's failed Saturn experiment, the doomed DaimlerChrysler marriage and the government's bailout negotiations with GM and Chrysler. The tales of bit players like the South Paris, Maine, Chrysler dealer Gene Benner and the father-son UAW members Fred and Gene Young of Belvidere, Ill., are effectively set against the machinations of management big shots like Billy Durant, Lee Iacocca and Richard Wagoner and labor honchos Walter Reuther, Leonard Woodcock and Stephen Yokich.

ARE WE THERE YET?
by Dan Albert
Nonfiction