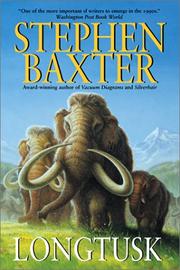 Second volume (following Silverhair, 1999) of Baxter’s trilogy, previously published in Britain. Baxter’s highly anthropomorphized mammoths—gentle giants, they have their own language and can comprehend others’—live 18,000 years ago, during an epoch when Siberia’s glacial climate warms, forests spread, and the arctic grasslands upon which the mammoths depend for sustenance shrink. Longtusk, a young male convinced of his great destiny, won’t listen to his Clan’s Matriarch or the wisdom of the herd’s elders. Instead, he wanders away, briefly joining a male herd among whom he is too young to compete. When fire sweeps the grasslands, Longtusk, separated from the herd, survives by walking through the flames along a riverbed. Lost, alone, his survival skills undeveloped, he becomes friendly with a tribe of Neanderthals, or Dreamers, and the young hunter Willow. Then modern humans, or Fireheads, arrive to kill or enslave the hapless Dreamers and capture Longtusk. Eventually, the Fireheads subdue Longtusk and put him to toil alongside the herd of “mastodons” they’ve domesticated. He endures years of ill-use before managing to escape, only to find his old Clan in desperate straits, dying of thirst and starvation. Can Longtusk help them survive not only climatic change but the pitiless Fireheads as well?

Sometimes affecting if often uncomfortably similar to the first installment, especially in the enslavement scenes; mammoth fans, though, will certainly want to continue their acquaintanceship.