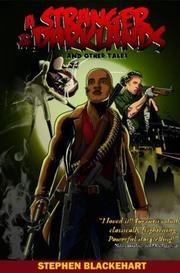 A Stranger to the Darklands

In this book’s first tale, set during World War II, the U.S. military enlists a wisecracking art thief named Bernie Ross to travel to Romania and impersonate Nazi officer Rolf Fleischer, whom he strikingly resembles. However, Ross and his companions don’t know that the German possesses a powerful relic that’s turned him into a vampire. This results in an entertaining, supernatural adventure story that’s reminiscent of the Indiana Jones movies. However, none of this tale’s lighthearted moments are to be found in the second—a gut-wrenching horror story about a witch in modern-day New Mexico. Real estate investor Sara Ramos Hollister’s child is abducted one snowy night by a shadowy figure, and five years later, Sara’s appraiser husband, Leonard, puts a tax lien on the home of a mysterious old woman, unknowingly invoking the hag’s dangerous wrath. This tale, like the first, is brilliantly frightening and sure to cause more than a few readers to think twice before turning off their lights at night. The third story, unfortunately, falls comparatively flat due to its cast of rather bland and sometimes-irritating characters. In it, U.S. State Department intern Charlie Wager is rendered a quadruple amputee after a bombing in Iraq, and he later becomes a voodoo-oriented superhero. He then tries to save his fiancee from dark forces that are turning hundreds of Brazilians into zombies. Author Blackehart, an actor by trade, says he decided to publish his tales as screenplays, as he originally wrote them, in order to maintain their authenticity. For the most part, this format works, thanks to the author’s agile prose and imagination. However, they do suffer from moments of forced dialogue and awkward interactions, due in part to the limitations of screenplay storytelling, in which characters must often voice plot exposition. These flaws aside, readers who enjoy a scare or two would do well to pick up this collection of memorable campfire stories.

A spooky, inventive and compelling compilation.