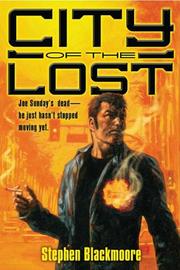 CITY OF THE LOST

A remarkable debut, LA noir with eye-bulging refinements, from a poet and short-story writer who says of himself: "As a writer he strives to be a hack. Hacks get paid. He's not sure if hacks talk about themselves in the third person, though. That might just be a side effect of his meds."

Joe Sunday, bad knees, weary resignation and all, is a leg-breaker for English gangster Simon Patterson when his buddy and partner-in-crime Julio Guerrera starts acting weird in a bar then rips his own throat out with a busted bottle. Seems that Simon sent Julio to steal a McGuffin from Chicago mobster Sandro Giavetti. Soon Joe confronts Giavetti, who strangles him. Joe wakes up to find he's in perfect health—except he's now room temperature and doesn't need to breathe. Giavetti, too, is immortal. "Well, maybe not so much Fountain of Youth as Fountain of Not Staying Dead." The only drawback as far as Joe is concerned is that he falls apart zombie-style every 24 hours and needs to chomp living flesh in order to return to being healthily undead. Oh, and the fact that the McGuffin, an egg-shaped gemstone, has vanished, and lots of folks want it. The basically indescribable plot involves said McGuffin and encounters with, among other beings, a mysteriously well-informed but unforthcoming femme fatale, a lecherous demon who tends bar in his own private universe, a do-gooder Latina bruja who wants to help homeless vampires, a diabolical Nazi wizard and a midget with teeth like a shark.