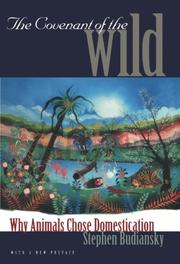 THE COVENANT OF THE WILD: Why Animals Chose Domestication

A subtle look at the mysteries of evolution and a stinging response to animal-rights extremists, as Budiansky, a Maryland farmer and assistant managing editor of U.S. News and World Reports, debuts with this hardheaded examination of the whys and bows of human-animal interaction. Environmentalists and animal-rights advocates, Budiansky points out, tend to venerate the most romantic of wild beasts: wolves, whales, and the like. Budiansky heads for the opposite shore, making heroes of sheep, cattle, dogs, cats, and other domesticates that thrive in human settlements. As his title indicates, he believes that these animals are not enslaved by humans but, rather, are in partnership with them--for he sees domestication as a covenant, an evolutionary agreement between humans and animals that ensures ""a mutual strategy for survival."" This win-win symbiosis can be seen in the reciprocal dependency of humans and a host of other species, including dogs (humans supply food and shelter; dogs help with hunting, shepherding, house-protecting); reindeer (who provide Laplanders with meat and in turn receive vital salts by lapping up human urine), and so on. Drawing on ethology, biology, climatology, genetics, evolutionary theory, and history, Budiansky pops some very large, very popular balloons: that all animals belong in the wilderness; that only humans kill for pleasure (the neighborhood cat turns out to be a bloodthirsty sadist); that all nonindustrial cultures live in harmony with nature (Polynesia, the Tibetan plateau, and the American Southwest each show signs of deforestation by native populations). Truth, he suggests, is far more complex and unromantic than some animal-rights advocates will admit. Ambrosia for anyone--whether in agreement with Budiansky or not--who appreciates the beauty of an argument that combines careful scholarship with common sense.