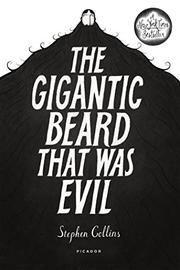 THE GIGANTIC BEARD THAT WAS EVIL

Cartoonist Collins’ debut graphic novel is a long, smooth fable of a man whose unkempt facial hair ravages the tidy city of Here.

Here sits on an island, surrounded by the sea, separated from the far-off land of There. And whereas Here is all row houses and trimmed trees and clean cheeks, There is a dark, disordered place that would mix your insides with your outsides, your befores with your nows with your nexts—unpleasant business brilliantly depicted in panels breaking across a single body as it succumbs to chaos. So the people of Here live quiet, fastidious lives, their backs to the sea, and neighbor Dave delights in doodling it all from his window as he listens to the Bangles’ “Eternal Flame” on repeat. But an irregular report at his inscrutable office job triggers the single hair that has always curved from Dave’s upper lip to be suddenly joined by a burst of follicles. Try as Dave might, his unruly beard won’t stop pouring from his face in a tangled flood—and soon it threatens the very fabric of life in Here. Collins’ illustrations are lush, rounded affairs with voluptuous shading across oblong planes. Expressions pop, from the severe upturn where a sympathetic psychiatrist’s brows meet to the befuddlement of a schoolgirl as the beard’s hypnotic powers take hold. With its archetypical conflict and deliberate dissection of language, the story seems aimed at delivering a moral, but the tale ultimately throws its aesthetics into abstraction rather than didacticism. The result rings a little hollow but goes down smooth.