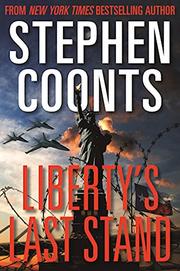 Islamic terrorists have snuck across the Mexican border and carried out vicious attacks that have killed hundreds of Americans. President Barry Soetoro (the name Barack Obama really used until he was 10) suspends the Constitution and declares martial law. Barack—er, Barry—is a gun-confiscating dictator, an emperor, and most likely a closeted gay man who needs the welfare-seeking, baby-popping Mexican illegals as future Democratic voters. Every right-thinking citizen is simply fed up to the gills with him. “It’s a miracle someone hasn’t shot at him before now,” a character says. “But why shoot him?” thinks Carmellini—the Republicans would win in November in a landslide anyway. But Soetoro cancels the election and arrests many prominent conservatives such as Rush Limbaugh. This is the crisis Carmellini has been waiting for. “If you live in America, you gotta have some guns,” he says, “so when the political contract falls apart…yeah!” So it’s no wonder that the good people of Texas decide to secede and re-form the Republic of Texas. Oba—sorry, Soetoro—intends to crush the rebellion at any cost. That means civil war, with civilians at grave risk on both sides. Power plants and bridges get destroyed, and hardly just in Texas. Evil Muslims play a dramatic role both in provoking the national crisis and in bringing about its dramatic resolution. “I am America’s hope,” declaims Soetoro in a final explosion of ego. The author doesn’t even bother to invent a completely fictional villain—no need, when he has the current president to slur.

This bilge is a middle finger in the face of most Americans, but if you happen to think Barry Soetorobama is the devil incarnate, then by all means buy it. The government knows where you live, though, so keep that AR-15 loaded and by your nightstand.