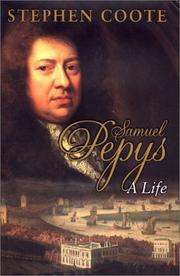 A sturdy and occasionally stirring biography of the Restoration bureaucrat and celebrated diarist Pepys (1633–1703).

Coote (Royal Survivor, 2000) rightly acknowledges Pepys’s remarkable diary as the greatest single source of information available for much of the quotidian detail of Restoration life. Pepys himself was a kind of Zelig: as a teenager he was present at the beheading of Charles I, he graduated from Cambridge, excelled at music, and became the trusted servant and secretary for naval affairs for Charles II, a member of Parliament whose speeches displayed a mastery of detail and rhetoric, a fellow of the Royal Society, an eloquent witness of the Great Fire, and a devoted fan of Restoration drama whose comments on individual productions appear in countless histories of English theater. His diary also records his more prurient interests, for Pepys, although married, was a pretty randy fellow. Barmaids, servant girls, wives of subordinates, women who happened to be near him in church—all were targets for his roving eyes and exploring hands. (Indeed, it was not until his wife caught him with his hand up the skirt of a servant that his serial adultery began to slow.) The author paints a portrait of a committed bureaucrat, a Restoration workaholic whose fierce attention to detail and mastery of the memorandum enabled him to rise in civil service until he was made responsible for the outfitting of the Royal Navy. Later, when venomous anti-Catholicism began to poison public life, Pepys literally fought for his life as determined enemies of the Catholic kings Charles II and James II sought to approximate regicide by destroying the credibility of the king’s trusted advisers with spurious charges of popery. His eyesight failing, Pepys eventually cleared his name and enjoyed a rich retirement surrounded by his beloved books and friends.

With skill, humor, and sound scholarship, Coote drags into the foreground a man whom history has carelessly consigned to the background.