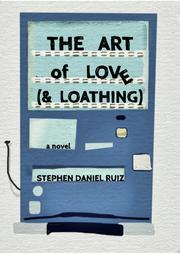 THE ART OF LOVE (& LOATHING)

Ruiz’s debut novel offers the tale of a man trying to get back on track after a stint in rehab.

Middle-aged Art Kimble is coming home to Queen City, Connecticut, after an attempted suicide and three months in a rehabilitation center, where he tried to kick his addiction to drugs and alcohol. He chats, in his head, with an anthropomorphic pigeon-detective character named Huxley, who acts as Art’s conscience as he tries to get his life back together. Upon his return, he finds his teenage son, Ryan, distant and his teenage daughter, Abi, acting much more grown-up. His ex-wife, meanwhile, is engaged to her infuriatingly perfect boyfriend, Ted, and selling the home that she and Art had bought together. Also, the literary magazine for which Art writes, Verb’d, is looking for ways to cut spending. As he attempts to reenter his former life, he continually feels like he’s failing, especially with his son. Eventually, he decides that he’s interested in buying his old house, as he holds onto a past that he desperately wants to fix. His financial worries, and the pressure that he feels to be a better father and person, send him stumbling back into drugs and booze, undoing months of rehab work and frightening his new girlfriend, Vivian. Even when Art very obviously chooses an incorrect path, readers will still feel sympathy for his struggle. This thoughtful novel makes it clear that he knows better but can’t seem to change his self-destructive nature. It makes for a frustrating read, at times, especially considering the book’s length of more than 500 pages. However, Ruiz’s prose is engaging and liberally peppered with a cynical humor; the story opens, for example, with statistics about people being crushed under vending machines. The first-person narration keeps the reader close to Art’s innermost thoughts, as well, which aren’t without moments of hope.

An often captivating novel about a recovering addict’s struggles.