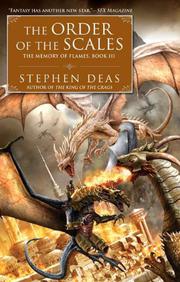 THE ORDER OF THE SCALES

Third entry in the series (The King of the Crags, 2011, etc.), all of which previously appeared in the U.K., about telepathic dragons who after death are reborn with their memories intact.

These are not cute, lovable, compliant, Anne McCaffrey–like dragons, or wise, ancient, unfathomable, Le Guin–style dragons, but arrogant, cruel, savage, man-eating dragons, seething with rage and the urge to destroy. Other than that, almost everything going on here is mystifying if you haven't read the previous books, and perhaps even if you have. Human factions, led variously by Valmeyan, Zafir, Jehal and Hyrkallan, each as devious and merciless as the next, have conspired, plotted, betrayed and ambushed in order to seize the title of Speaker—whatever that entails. Intermittent hostilities have degenerated into all-out warfare, as warriors mounted on war-dragons contend for mastery of the skies, their dragons tamed and controlled by means of potions brewed by the alchemists. But now the potions have run out and a new generation of feral dragons has arisen, fully cognizant of their long slavery and thirsting for vengeance. So, much as they hate and despise each other, the factions must unite against this existential threat. Other elements in this ferociously explosive mix include Kithyr, a blood-mage hired to steal the dragon-slaying Adamantine Spear by the Picker, an Elemental Man and agent of the mysterious Taiytakei, a people from across the ocean; and the adventures of Kemir, a wandering mercenary who's somehow become attached to Snow, one of the awakened dragons. Both humans and dragons have personalities and obscure agendas. What they do is wildly unpredictable and always subordinate to sheer spectacle.

Startling, unremitting violence at a blistering pace, where who survives, wins.