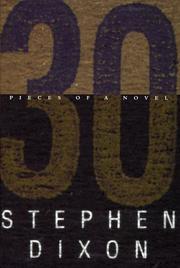 Novelist and storywriter Dixon (Sleep, p. 102, etc.) offers a big, generous, free-form fictional autobiography of his alter ego—husband, father, and writer-teacher Gould Bookbinder (who first appeared in 1997’s Gould). It develops in an unusual way: 30 separate chapters (arranged in apparently random order) detail both real and imaginary experiences, crowned by the book length “Ends” (itself containing 15 substantial sub-chapters) that considers possible ways in which this story itself might have concluded (for example, a moving sequence entitled “The Brother” dreams what if . . . an older brother who died young had instead grown up to become his sibling’s intellectual soulmate and rival). Many chapters explore Gould’s relationships with his wife Sally (a victim of multiple sclerosis) and their two daughters (“Accidents and Mishaps” is an especially acute dramatization of parental fears). Others (such as “Everything Goes” and “The Burial”) examine his feelings about—and attempts to care for—his distant mother and scarcely known father; sexual fact and fantasy (“Popovers” unsparingly describes his foolish infatuation with a young waitress at a Maine resort, and “The Bellydancer” amusingly recounts the young Gould’s victimization by an older woman’s erotic gamesmanship) or discrete accidents (in “The Suicide,” Gould’s reaction when a casual acquaintance violently takes his own life exfoliates into a complex, funny threnody on his own preoccupation with death). Dixon’s sedulously plain style and penchant for stream-of-consciousness monologues and long run-on paragraphs make for a sometimes wearying read, but over the long haul his gamble pays off: we observe his thoughtful, egoistic, sometimes faithless protagonist in so many recognizably human situations that it’s impossible to deny his essential resemblance to all of us. Best read in conjunction with Gould, though also quite accessible on its own—and probably Dixon’s best so far.