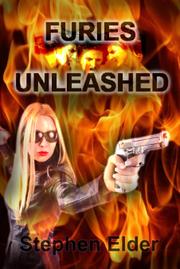 In Elder’s (Daughters of the World, 2014, etc.) thriller, sex-trafficking mobsters and U.S. authorities threaten a secret group that specializes in administering justice for violated women.

Sandra Neuermann is raped and narrowly escapes her assailants, who likely would have killed her. Cops apprehend the two men, but the arrest is thrown out on a technicality. This makes Neuermann a perfect recruit for Nemesis, a covert organization (of mostly women) that helps rape victims and targets those attackers who’ve escaped punishment. Neuermann trains as a Fury, a field operative, going after and sometimes killing rapists as well as sex traffickers, like an Albanian Mafia family in New York. However, Nemesis’ full-on assault against said family may be drawing too much attention from both gangsters and the alphabet soup of U.S. agencies, who’ve noticed that a lot of baddies have been disappearing. Elder’s thriller highlights a group of female agents without turning the idea into a gimmick. The women are undeniably formidable with guns, fisticuffs, or at a computer: Bridget O’Rourke “tapped her keyboard and the engines in the Mercedes and the Range Rover died. The doors locked, and the occupants heard a loud pop. It was the last thing they heard as the canisters released a knockout gas.” The villains are a largely rotten bunch, seemingly deserving of their fate at the business end of a Sig or sniper rifle. Yet Elder deepens his story by addressing the inevitable fallout: one Fury in particular is devastated when she has to kill an innocent bystander simply because he could have identified her later. Nemesis Director Jeanne Mooth, too, prides herself on the organization’s hovering under the radar—something that’s increasingly difficult to accomplish when it’s abundantly clear to all interested parties that someone is specifically targeting the Albanian mob’s brothels. Neuermann is a well-established protagonist who starts a relationship with handsome, kindhearted teacher Daniel, which may explain her gradual aversion to killing and preference for less-personal strikes against sex-trafficking groups. Unfortunately, other Furies don’t receive as much characterization. Many are relegated to Nemesis reports; Jane and Arlene, for example, first appear as names in their filed paperwork, merely to introduce (and close) the latest rapist’s case. The ending may shock more than a few readers, but it definitely packs a dramatic punch.

An assassin story that delivers action while shrewdly examining the consequences.