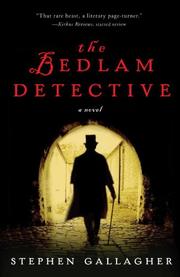 Monsters, actual and metaphorical, are at the heart of this superbly crafted thriller.

Gallagher has been called a horror writer, a fantasy writer, a non-fantasy writer, a writer for big screens and smaller ones, a writer whose considerable talent has enabled him to slip in and out of genres precisely as if those tidy little boxes didn’t exist—as indeed they don’t for his character-driven books. In this one, Sebastian Becker (The Kingdom of Bones, 2007, etc.), his fast-track career abruptly derailed, contemplates an uncertain future. Now that the Pinkertons have sent him packing, he faces 1912 back in his native England, employed as the special investigator to the Masters of Lunacy. Englishmen of property deemed too loopy to look after anyone’s property face Bedlams of one sort or another, their property removed from their care. It’s up to Sir James Crichton-Browne, acting for His Majesty’s Government, to render judgments informed by evidence his special investigator Sebastian provides. The job pays poorly but is nuanced enough to be interesting. And it gets even more so when Sebastian meets Sir Owain Lancaster, a scientist who’s been widely respected until he blames the failure of his lavish Amazonian expedition on a series of attacks by horrific monsters only he can see. No longer respected but still exceedingly rich, he becomes grist for Sebastian’s mill. Is Sir Owain really crazy? Or, much worse, is he himself a monster?

Gallagher loves character development but respects plotting enough to give it full measure. The result is that rare beast, a literary page turner.