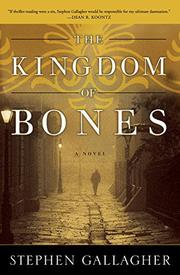 THE KINGDOM OF BONES

In this moody, gripping period thriller, the shadowy world of the undead sucks in a beautiful actress and the man who would give his life to save hers.

Gallagher (The Painted Bride, 2006, etc.) skillfully weaves together vampire myths and the theatrical world of late Victorian England. Bram Stoker, future author of Dracula, manages the Lyceum Theatre company for celebrated actor Henry Irving. Stoker becomes an important observer on the scene when Tom Sayers, his opposite number in a much less prestigious touring company, is charged with a series of sadistic murders. A big-hearted former boxer, Sayers is hopelessly in love with mildly talented singer-actress Louise Porter, who is infatuated with fellow trouper James Caspar. It’s Caspar who’s the real murderer, a fiend who spends his off hours flaying homeless boys. The detective on the case is Sebastian Becker, a rising young policeman who falls for Caspar’s frame-up of Sayers after Caspar murders a senior officer following up on an anonymous note from one of the doomed lads. A last-minute escape from brutal cops who would happily maul him to death sends Sayers on the lam and ultimately to America, but not before he saves the pursuing policeman’s life, an act that gives Becker understandable pause. Detective and fugitive are reunited 15 years later in Philadelphia. Disgraced by Sayers’ escape, Becker has gone there to work for the Pinkerton detective agency. Sayers has followed Louise, who believes she is in thrall to the same evil spirit that gripped Caspar (now dead), a spirit passed down from generations past. Forming an uneasy team, the policeman and the love-struck manager, eventually joined by Stoker, track the tragic actress from city to city as she leads a string of rich young masochists to their doom.