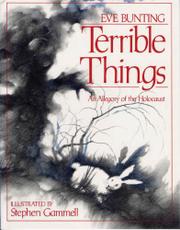 An Allegory Of The Holocaust

An earnest fable that is too ponderous and too shadowy to be effective. It opens with the small forest creatures, content in the clearing "until the day the Terrible Things came." Rabbit sees their Terrible shadows, which loom like the shadows of huge human busts, as the Terrible Things announce that they have come for "every creature with feathers on its back." "We don't have feathers," clamor the frogs, the squirrels, the porcupines, the rabbits, and the fish; and so only the birds are taken this time. The other creatures, relieved to be spared, don't much care, though Little Rabbit asks them, "What's wrong with feathers?" But of course the Terrible Things come back. . . first for the bushy-tailed, next for the swimmers, and so on until everyone is gone except (unrealistically) for Little Rabbit, who has hidden in a pile of rocks. "If only we creatures had stuck together, it would have been different," says Little Rabbit sadly, making Bunting's point clear but not its application. Who or what are the Terrible Things in a small child's world? (Their own answer might be parents and teachers.) And how can children gang tip against them? Kids will probably be able to parrot the lesson, but without a lot of pulling and prodding, will they relate to it? And if so, how?