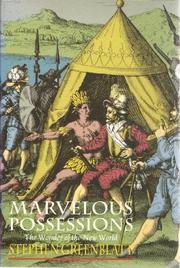 The Wonder of the New World

A witty and erudite study of early American explorers and their sensibilities, by Greenblatt (English Lit./Univ. of Cal. at Berkeley; Sir Walter Raleigh, 1973). The capacity for simple wonder (and whether we have lost it) is the author's stated concern, but there is a strong subtheme here, reminiscent of Heisenberg's Uncertainty Principle—the inevitable corruption of observation by cultural predisposition: ``We can be certain only that European representations of the New World tell us something about...European representation.'' In looking closely at these explorers' perceptions of foreign lands, Greenblatt time and again tweaks us with wry precision: ``The authors...were liars—few of them steady liars, but frequent and cunning liars.'' Any generalization about a monolithic European sensibility is subjected to common-sense scrutiny. The Calvinist who compares his Roman Catholic expedition leader to local cannibals because ``he wanted to eat the flesh of Jesus Christ raw'' is clearly going to see things very differently from his boss. Readable throughout, Greenblatt never strays from the human basics: ``Marco Polo [is] constantly weighing the possibilities for trade...Columbus imagines he is acquiring for his Sovereigns an outlying corner of the Great Khan's empire, Mandeville acquires nothing.'' The narrative is rich with humanity. In particular, it is difficult to forget the diplomatic gifts of the Indian woman, known as Dona Marina to the Spaniards, who swiftly learns Spanish, transcends her cultural perspective, and becomes not just the translator between Montezuma and CortÇs but ``the figure in whom all communication between the opposing cultures was concentrated.'' Greenblatt's deft handling of intellectual baggage is a special gift, but his clear, quick, pungent re-creation of specific people and events in this context is remarkable. (Sixteen halftones—not seen.)