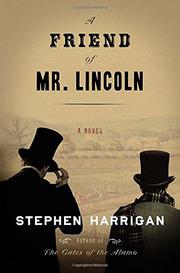 A FRIEND OF MR. LINCOLN

A novel that concentrates on Lincoln’s early years in Illinois, from his friendship with the (fictional) poet Cage Weatherby to his (altogether too real) relationship with Mary Todd.

Harrigan presents Lincoln warts and all. In his version, Lincoln tells ribald jokes, writes morbid poetry, and even threatens suicide when he gets engaged to Mary Todd and at some level realizes the engagement is a terrible mistake. The novel opens with the aftermath of Lincoln’s assassination and then flashes back to when he was 22 and meeting Cage for the first time as they buried casualties of the Black Hawk War. Cage is presented as a skilled amateur poet whose work Lincoln much admires and a successful businessman—at least till the end of the novel, when his investments collapse. Cage becomes Lincoln’s confidant as Lincoln moves from being an itinerant lawyer to a member of the state legislature. Along the way we get to know some of Lincoln’s idiosyncrasies—his social ineptness, for example, especially around his fiancee—though these are balanced by a strong sense of honor and awareness of right and wrong. In one of his best moments he defends Cordelia, a runaway slave employed as a seamstress in a shop owned by Cage’s mistress, who's been thrown in jail until her owner can come north to claim her. Through legal knowledge and a sense of the dramatic, he succeeds in securing her freedom. In another episode, both ludicrous and grim, Lincoln is challenged to a duel by a man who feels he’s been slandered—and as the one challenged, Lincoln is allowed to choose the weapons. He chooses…broadswords. "You mean to fight this duel like a medieval knight?" a friend asks. "I mean to fight this duel with a weapon I can kill Jim Shields with if I need to," Lincoln replies.

A narrative that presents keen insights into Lincoln’s complex personality.