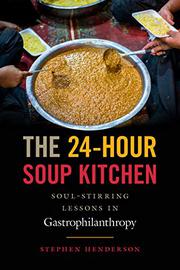 A New York–based journalist recounts his experiences in some of the world’s soup kitchens in this debut memoir.

Henderson was in France on a mission to buy an “absurdly expensive oven” when he was asked if he had ever come across the Frenchman Alexis Soyer, who became Victorian Britain’s most celebrated chef. Learning about Soyer, inventor of the soup kitchen, inspired the author to begin his own “gastrophilanthropic” journey. Interested in feeding large numbers of people but with no professional training, Henderson began utilizing his journalistic expeditions as a way of learning more. When visiting Delhi to write an article about India’s fashion week, he discovered that Sikh temples “operate 24-hour soup kitchens.” He later completed a five-day apprenticeship at one such kitchen. The author’s travels also took him to Iran, where he learned about nazr, a spiritual vow that can involve “voluntarily cooking for others.” Henderson then made his own vow to volunteer at a soup kitchen in Pittsburgh to celebrate each year that his niece completed in her Ph.D. program. The memoir details his experiences in Japan, where he stayed at a Buddhist temple; Mexico, where he cooked a meal for a group of “homeless street kids and transgendered sex workers”; Peru; Israel; and South Korea. The author also discusses volunteering at soup kitchens across America.

Henderson’s writing bubbles with enthusiasm. When describing feeding a group of seemingly nonchalant youths at a shelter in Los Angeles, he writes: “What I saw…over the next hour was how a home-cooked meal can transform a roomful of sullen teenagers into a group of cheerful children.” His narrative is also woven with a wealth of background data that underlines the gravity of the homelessness crisis: “It’s also estimated that there may be between one million and three million homeless children currently living on the streets in the United States.” The author’s delightful descriptive skills that often draw on culinary metaphors add a sprinkling of levity to a serious subject (a road in the Andes is depicted as having the “consistency of pudding” and an Israeli tour guide had “hair dyed a shade of red best described as ‘medium rare’ ”). Henderson is conscious of how his approach to “gastrophilanthropy” is viewed by others. He candidly reveals that one friend referred to his journeys as “magical misery tours” whereas another nicknamed him “His Holiness” behind his back. Unafraid to introduce a broad range of perspectives to the memoir, the author admits that “making a meal is, after all, an imposition of your taste onto someone else.” He intelligently defends his position on feeding the poor, drawing on the French philosopher Jacques Derrida’s proposal that “charity is based on income inequity.” Henderson boldly dismisses this explanation as “a clever intellectual’s rationale for doing nothing.” The author draws courage from how his idol, Soyer, was also derided for his acts of charity but endeavored to make a change regardless. This book would benefit from a more determined effort to smoothly segue between chapters; it occasionally reads as a series of independent essays that do not fit together. But this detracts little from a graceful, well-balanced, and enlightening work.

An inspiring philanthropic account that deftly displays the author’s affability, knowledge, and passion.