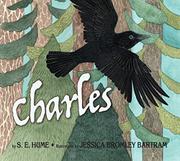 A young child rescues a baby crow and cares for him until he flies away.

Writing in the voice of the unnamed narrator, Hume delivers a tender story about raising an abandoned baby crow. The narrator lives in a home surrounded by the natural world, brought to lush life by Bartram’s enchanting, accurate illustrations (baby crows do have blue eyes), which are done in a rich, nature-hued palette and feature simple shapes decorated with patterns found in nature—such as the spores on fern fronds. The shapes and patterns against the white space of the page thoughtfully integrate the story’s theme by bringing attention to nature’s inherent order and harmony. The child, walking in the woods, finds a nearly featherless baby crow and brings him home after it is apparent he has been abandoned. Naming him “Charles” for the sounds he makes, they feed him cereal with strawberries, which he likes. As Charles grows, he begins to fly—first to the large pine tree and then off altogether, leaving the narrator forlorn. Then, on a full-moon night days later, a crow taps at the child’s window and leaves a strawberry. The child has pale skin and long, black hair, just like their mother.

Quiet words combine with accurate, well-designed illustrations to create a full, lush picture book about caring and being close to nature.