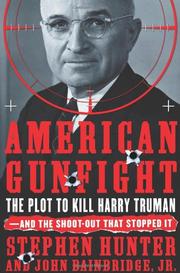 Journalists Hunter and Bainbridge reconstruct an attempt on Harry Truman’s life, an event that “was of course gigantic news—for about a week.”

The principal actors in the November 1950 attempt were two Puerto Rican nationalists, Oscar Collazo and Griselio Torresola, devotees of a lawyer-revolutionary named Pedro Albizu Campos. The extent of their connection to Campos was not known until long after the attack, yet the operative principle was simple: If any attempt were made on Campos’s life in Puerto Rico, then cells would activate in the U.S. and kill Truman. The witness may not have been entirely reliable, and in all events of the assassination effort, there was a certain amount of dumb luck: Truman was staying across the street from the White House, which was being renovated, a fact that a helpful cab driver had to point out to Collazo and Torresola; Collazo had few qualifications apart from a commitment to the cause; much of the attack was concocted on the spot. Yet Torresola was able to shoot several guards and get within ten yards of Truman before being taken down. It all makes for an intrinsically interesting story, but the authors tend to tell everything they can about any particular point of play, layering on incidental details about the lives of D.C. cops and expounding on the history and geography of Puerto Rico while drifting much too often into breathless Dragnet-speak: “The president is in the window he is thirty feet from Griselio who stands unnoticed at the stairway to Lee House the men on the other side haven’t noticed him yet he’s shot at three men and downed them all the president is thirty feet away and he has a straight line-of-sight picture to that window and there stands the president of the United States so he is very much in the kill zone.”

Those with patience for run-on sentences may enjoy this long footnote to history.