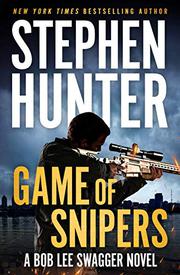 Seventy-two-year-old retired sniper Bob Lee Swagger watches the prairie from his rocking chair in Idaho, neither expecting nor wanting to see anyone. But Janet McDowell shows up, saying that her son was shot by a sniper in Baghdad and that she had gone to extraordinary, fruitless trouble trying to exact vengeance on Juba the Sniper, who has killed hundreds of Americans. Swagger agrees to hunt the man down—hey, it’ll be more interesting than hanging out at Cracker Barrel. Meanwhile, Juba dreams of killing Marines—“The world was a kill box. His finger spoke for God.” Soon Swagger is in Tel Aviv, chatting with the Mossad. They want Juba, too, but they want him alive “to have a series of chats with him.” Swagger would like to feed Juba’s face to the pigs, but “Alas,” he’s told, “we’re a little Jewish country. No pigs.” Scenes with Juba show off his bloodthirsty side—wait, that’s his only side, for which he routinely gives thanks. This chap is a fascinating one-dimensional villain, crediting his bloodlust to God. Then U.S. intelligence learns that Juba is coming to America to kill a high-value target from a long-distance shot, so Swagger returns home. There’s more than enough detail in this story about hollow point shells, muzzle velocities, and precision kills from over a mile away to make Second Amendment worshipers quiver jellolike with excitement. As the title suggests, Swagger and Juba are inevitably in for a showdown, not a little chat, and it’s going to be spectacular. The author is a Pulitzer Prize–winning film critic who knows how to tell a crackling good story.

Fast-moving, violent, and entertaining, this is genuine good-guy–versus–bad-guy stuff.