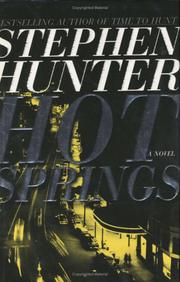 In the category of slam-bang, testosterone-laden, body-bag filling, hellzapoppin' potboilers, this is as good as it gets.

For those who may have wondered about the gene pool that helped produce master sniper Bob Lee Swagger, the author's demigod of a series hero (Time to Hunt, 1998, etc.), here's the tell-all prequel. Earl Swagger, valiant marine, Congressional Medal of Honor winner, is Bob Lee's demigod of a daddy. We also meet Bob Lee's brave and beautiful mama. It's the summer of 1946, and Hot Springs, Arkansas, is under the thumb of gangster Owney Maddox, who has a dream: he wants to refashion Hot Springs into an oasis of sin, a place where Meyer Lansky, Lucky Luciano, Bugsy Siegel, et al., will feel safe, comfortable, and cosseted. He’s halfway there. On the surface Special Prosecutor Fred C. Becker doesn't seem much of a deterrent, but Becker has a dream too: he wants to be Arkansas's youngest governor ever. Moreover, he has a plan: to bring Owney down by recruiting and training an elite task force that can strike hard, fast, and ruthlessly. Earl Swagger—who better?—is charged with the training. At first, things go right. The recruits are eager and motivated. Aided by the element of surprise, they deliver a series of blows that shake the Maddox realm to its Sodom-like foundations. But then Maddox, with the whole of New York gangsterdom to draw from, recruits his own elite force. The stage is set for blood-drenched confrontations, during which lots of bad men are killed, some good men are betrayed, and Earl performs exactly the way Bob Lee's progenitor should.

Natural storyteller Hunter knows the value of the occasional poignant scene to give his firefights breathing room. Not for a minute to be taken seriously, but, all in all, a blast.