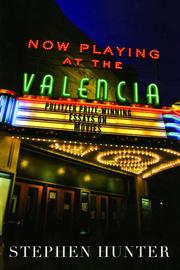 NOW PLAYING AT THE VALENCIA

That other Pulitzer Prize–winning movie critic comes out shooting.

A quick look at the oeuvre of novelist Hunter (Havana, 2003, etc.) shows that he’s a writer with a yen for tales of dirtied honor, bloodied warriors and lots of guns (American Gunfight, also Nov. 2005). In addition to being a novelist, Hunter is a film critic for The Washington Post, and an uncommonly good one at that. This collection of Post film reviews takes its name from the old theaterback in Evanston, Ill., where as a child during the 1950s, Hunter took in double features of westerns, gangster flicks and monster movies. Winner of the 2003 Pulitzer for criticism, Hunter brings an incisive eye to under-regarded works and has a propensity for vanity-deflating quips. Like the only other film critic to win a Pulitzer, Roger Ebert, he is able to wax just as enthusiastic about Cold Mountain as he does about The Third Man and Face/Off. Along the way, he demolishes a few classics (he objects to Gone with the Wind’s “gooeyness, its spiritual ugliness, its solemn self-importance”), trashes many a lousy studio vehicle and still finds time to celebrate the loud, brash and popular.

A smart and riotous glorification of everything that is fantastic about the cinema.