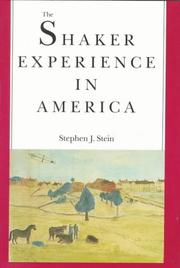 THE SHAKER EXPERIENCE IN AMERICA

A History of the United Society of Believers

An unusually comprehensive and eminently readable chronicle of more than two centuries of Shaker life, from its rough beginning in the late 18th century to its diminished yet still significant presence today. In his thoroughness, Stein (Religious Studies/Indiana Univ.) turns first to England, where Ann Lee, founder of the United Society of Believers in Christ's Second Coming, was born and felt the call that would bring her and others to the US in 1774, hoping to find fertile ground where their religion could take root. Establishing a small settlement near Albany as home base, persistent missionary efforts in New England by ``Mother'' Lee and her followers drew considerable notice, much of it unfavorable. Undaunted by the abuse, the Shakers intensified the task of broadcasting the Shaker message after Lee's death in 1784, with communities arising from southern Maine to Indiana during a period of vigorous growth and accomplishment lasting well into the 1820's. Although the Society continued to prosper, retrenchment and losses to apostasy increased in the second half of the century as many found fault with the severe work ethic and celibacy requirement or were lured away for other reasons. Never entirely self-sufficient, Believers put their hands-to-work philosophy to use by making and selling various products—everything from seeds to furniture—but dwindling numbers resulted in ever fewer hands. One by one, groups were consolidated and properties sold, until by 1925 only six sites remained. But with a resurgence of interest in the Society's spiritualism and its products, both an active community and a ``world of Shaker'' remain today—so, Stein says, a future may still exist for them both. Clear and well-researched: an invaluable history for those interested in one of the more fascinating forms of the American religious experience. (Fifty-seven illustrations—not seen.)