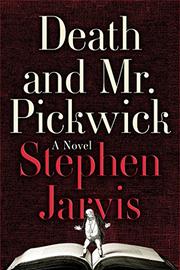 Beguiling, entertaining novel of Dickensian England, cramming most of the island and its most interesting characters into 800 teeming pages.

Did Charles Dickens come up with all those wonderful stories of his all by himself? Nay. Debut novelist Jarvis, a British journalist and adventurer, sets numerous Dickens-worthy tales into motion in one big book, some out of the mouths of beloved characters: “though even Moses Pickwick was not mad enough to tell the entire story of Prince Bladud to his horse, he did tell the story to one or two interested customers inside the Hare and Hounds.” Storytelling—the exceedingly arcane tale of the prince among other set pieces, along with a few shaggier yarns and the straightforward exposition of the narrator nicknamed Scripty—is central to Jarvis’ enterprise, but more so the teller of the tale, for among Dickens scholars there has long been controversy over authorship, a question that Jarvis complicates by placing Dickens’ first illustrator, Robert Seymour, at the center of the story—and suggesting that Seymour deserves more credit than he gets. The story is the thing, though, even if Jarvis invites us not to believe all the stories we hear: “That story doesn’t wash,” says Seymour, while Dickens himself “committed certain deceptions which, so far, no one had noticed.” Chalk it up to drink, perhaps, for the book is full of bibulousness as much as suspect tales (“his wooden legs wore out quickly when he drank gin and water,” “There is one answer: gin, Mr Seymour, gin!”), the two connecting in the very name of the author in dispute: “ ‘Boz’ is the biggest joke of all. Pickwick is written by a genius called Booze.” But there’s more to it than the sauce; in the end, this lavish story is a celebration of art and conviviality.

Dickens himself would be proud of Jarvis’ capture of so huge a slice of life. Humane and funny, though the Heditor might have taken a sterner hand here and there.