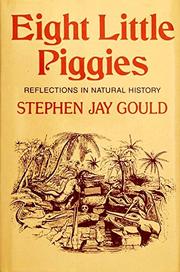 Who could resist a title like that—and, knowing the author, who wouldn't surmise that Gould (Bully for Brontosaurus, 1991, etc.) is again up to his old trick of demonstrating that five fingers and five toes are not the primordial/canonical mammalian standard. Thanks to the discovery of species of ancient tetrapods (four- legged terrestrial vertebrates) living upwards of 350 million years ago, we now have evidence of seven- and eight-toed critters. So Gould sounds forth on a favorite theme of diversity and experimentation early in the course of evolution, with bushy branches off the tetrapod trunk and not ascent up a ladder that ends in humanity. And that's just the title essay, one of 31 Gould has distilled here from his monthly column in Natural History. He offers a reader's guide up front, explaining his clusterings of essays, advising that he has at last addressed the issue of species-destruction by human interventions (in poignant essays on the passenger pigeons and species of snails, which are to Gould what beetles were to Darwin), and, finally, telling dear reader which are his favorites—and why. Of the latter, he likes his people pieces and those essays in which the fossil evidence itself is used to illuminate the thinking of scientists within a cultural milieu. Gould points out that scientific discovery is never an act of pure reason nor totally culturally relative, but a marriage of the two. Elsewhere, there are wonderful essays on setting the record straight (Eugene Dubois and Java man); anatomy (how jaw bones became ear bones); essays with baseball references, on Darwin, on the brain, on evolution.... In sum, essays that reveal Gould in midlife, as passionate and articulate as ever, but older and wiser. Gould says the columns will continue through January 2001—for which readers everywhere should be grateful. (Drawings.)