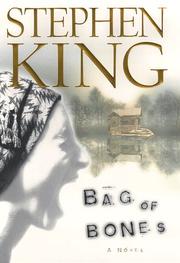 Leaving Viking for the storied literary patina of Scribner, current or not, King seemingly strives on the page for a less vulgar gloss. And he eases from horror into romantic suspense, while adding dollops of the supernatural. The probable model: structural echoes of Daphne du Maurier’s Rebecca do sound forth, although King never writes one paragraph herein to match du Maurier’s opening moonscapes of Manderley. What comes through nevertheless is a strong pull to upgrade his style and storytelling in this his 50th year. Yes, he actually does write better if with less energy and power than in Desperation (1996). In fact, attacking the race problem in lily-white Maine, he even assumes an almost Dreiserian seriousness in his final paragraphs. Well, the story: romantic-suspense novelist Michael Noonan, who summers in Castle Rock on Dark Score Lake, falls into a four-year writer’s block when his wife Johanna dies of a brain blowout. Now 40 and childless, Mike has salted away four extra novel manuscripts in his safe-deposit box, one of them 11 years old (shades of Richard Bachman!), and keeps up a pretense of productivity by publishing a “new” novel each year. Meanwhile, he finds himself falling for Mattie Devore, a widowed mother half his age. Mattie’s late husband is the son of still-thriving half-billionaire computer king Max Devore, 85 years old and monstrous, who plans to gain possession of Mattie’s three-year-old daughter, the banally drawn Kyra. Mike’s first big question: Did Johanna cuckold him during his long hours writing? If so, will her character reverse our understanding of her, as does Rebecca de Winter’s? And how can he help Mattie fight off Max and keep Kyra? The supernatural elements, largely reserved for the interracial climax, are Standard King but fairly mild. Philosophically limited but a promising artistic shift for a writer who tried something like this with 1995’s failure, Rose Madder.