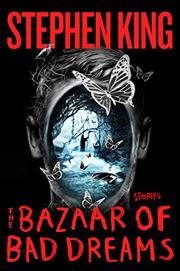 THE BAZAAR OF BAD DREAMS

A gathering of short stories by an ascended master of the form.

Best known for mega-bestselling horror yarns, King (Finders Keepers, 2015, etc.) has been writing short stories for a very long time, moving among genres and honing his craft. This gathering of 20 stories, about half previously published and half new, speaks to King’s considerable abilities as a writer of genre fiction who manages to expand and improve the genre as he works; certainly no one has invested ordinary reality and ordinary objects with as much creepiness as King, mostly things that move (cars, kid’s scooters, Ferris wheels). Some stories would not have been out of place in the pulp magazines of the 1940s and ’50s, with allowances for modern references (“Somewhere far off, a helicopter beats at the sky over the Gulf. The DEA looking for drug runners, the Judge supposes”). Pulpy though some stories are, the published pieces have noble pedigrees, having appeared in places such as Granta and The New Yorker. Many inhabit the same literary universe as Raymond Carver, whom King even name-checks in an extraordinarily clever tale of the multiple realities hidden in a simple Kindle device: “What else is there by Raymond Carver in the worlds of Ur? Is there one—or a dozen, or a thousand—where he quit smoking, lived to be 70, and wrote another half a dozen books?” Like Carver, King often populates his stories with blue-collar people who drink too much, worry about money, and mistrust everything and everyone: “Every time you see bright stuff, somebody turns on the rain machine. The bright stuff is never colorfast.” Best of all, lifting the curtain, King prefaces the stories with notes about how they came about (“This one had to be told, because I knew exactly what kind of language I wanted to use”). Those notes alone make this a must for aspiring writers.