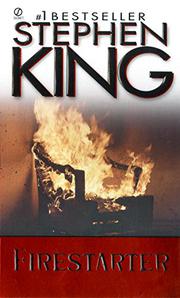 An improvement over The Dead Zone, with King returning to his most tried-and-true blueprint. As in The Shining, the psi-carrier is a child, an eight-year-old girl named Charlie; but instead of foresight or hindsight, Charlie has firestarting powers. She looks and a thing pops into flame—a teddy bear, a nasty man's shoes, or (by novel's end) steel walls, whole houses, and stables and crowds of government villains. Charlie's parents Vicky and Andy were once college guinea pigs for drug experiments by The Shop, a part of the supersecret Department of Scientific Intelligence, and were given a hyperpowerful hallucinogen which affected their chromosomes and left each with strange powers of mental transference and telekinesis. When Vicky and Andy married, their genes produced Charlie and her wild talent for pyrokinesis: even as a baby in her crib, Charlie would start fires when upset and, later on, once set her mother's hands on fire. So Andy is trying to teach Charlie how to keep her volatile emotions in check. But when one day he comes home to find Vicky gruesomely dead in the ironing-board-closet, murdered by The Shop (all the experimental guinea pigs are being eliminated), Andy goes into hiding with Charlie in Manhattan and the Vermont backwoods—and Charlie uses her powers to set the bad men on fire and blow up their cars. They're soon captured, however, by Rainbird, a one-eyed giant Indian with a melted face—and father and daughter, separated, spend months being tested in The Shop. Then Andy engineers their escape, but when Andy is shot by Rainbird, Charlie turns loose her atomic eyes on the big compound. . . . Dumb, very, and still a far cry from the excitement of The Shining or Salem's Lot—but King keeps the story moving with his lively fire-gimmick and fewer pages of cotton padding than in his recent, sluggish efforts. The built-in readership will not be disappointed.