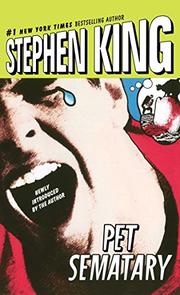 This novel began as a reworking of W.W. Jacobs' horror classic "The Monkey's Paw"—a short story about the dreadful outcome when a father wishes for his dead son's resurrection. And King's 400-page version reads, in fact, like a monstrously padded short story, moving so slowly that every plot-turn becomes lumberingly predictable. Still, readers with a taste for the morbid and ghoulish will find unlimited dark, mortality-obsessed atmosphere here—as Dr. Louis Creed arrives in Maine with wife Rachel and their two little kids Ellie and Gage, moving into a semi-rural house not far from the "Pet Sematary": a spot in the woods where local kids have been burying their pets for decades. Louis, 35, finds a great new friend/father-figure in elderly neighbor Jud Crandall; he begins work as director of the local university health-services. But Louis is oppressed by thoughts of death—especially after a dying student whispers something about the pet cemetery, then reappears in a dream (but is it a dream) to lead Louis into those woods during the middle of the night. What is the secret of the Pet Sematary? Well, eventually old Jud gives Louis a lecture/tour of the Pet Sematary's "annex"—an old Micmac burying ground where pets have been buried. . .and then reappeared alive! So, when little Ellie's beloved cat Church is run over (while Ellie's visiting grandfolks), Louis and Jud bury it in the annex—resulting in a faintly nasty resurrection: Church reappears, now with a foul smell and a creepy demeanor. But: what would happen if a human corpse were buried there? That's the question when Louis' little son Gage is promptly killed in an accident. Will grieving father Louis dig up his son's body from the normal graveyard and replant it in the Pet Sematary? What about the stories of a previous similar attempt—when dead Timmy Baterman was "transformed into some sort of all-knowing daemon?" Will Gage return to the living—but as "a thing of evil?" He will indeed, spouting obscenities and committing murder. . .before Louis must eliminate this child-demon he has unleashed. Filled out with overdone family melodrama (the feud between Louis and his father-in-law) and repetitious inner monologues: a broody horror tale that's strong on dark, depressing chills, weak on suspense or surprise—and not likely to please the fans of King's zestier, livelier terror-thons.